I finally have enough time behind the Workman keyboard layout to say what I think about the layout in general.

Executive Summary. Workman is undoubtedly a better layout than Colemak when considering typing comfort and speed. It is particularly better than Colemak on the speed metric. I will not continue to use it, however. The intentionally high single hand utilization causes excessive fatigue and hinders speed past the 100 WPM mark. I am returning to the Classic Dvorak layout to re-examine the layout in light of my current computing platform and new experience in keyboard layouts.

History. I have been typing for most of my life. I can type an average of 120 WPM in the Qwerty layout. More than 10 years ago I learned the Dvorak layout and spent a good deal of time learning and using it. I was able to match my Qwerty speeds in the 110 - 120 WPM range. At that time however I was also doing a great deal of work with the UNIX command-line and the placement of the L key caused enough of an issue that I eventually moved away from using Dvorak.

Then came the new kid on the block, Colemak. I spent some time learning this new and fanciful layout. The important difference in the Colemak layout is the similarity that it has to the Qwerty layout. In uses different metrics than the Dvorak keyboard, but ones that on the surface and to most people make a fair bit of sense.

Unfortunately, after spending enough time with the layout I was able to get to 80 WPM, but not much further than that. The layout itself was comfortable enough, but at speed, the layout begins to break down. Specifically, there is this notion that I will call composability that becomes important if you want to type fast. You need to be able to make transitions between groups of characters that your fingers have learned to type fast in a fast and comfortable manner. Colemak has an awkward set of transitions that come into play only after you begin to push that 100 WPM mark.

This was the first time that I realized that a keyboard layout could be comfortable and ergonomic like Colemak is, without also being fast. Spending some time with things I came to understand that while Colemak may be ergonomic, is was not as inherently fast as the dreaded Qwerty layout.

So I went back to my Qwerty keyboard. Any keyboard layout that I use needs to be at least as fast as Qwerty. That means easily maintaining a 120 WPM clip while exceeding 150 WPM on more normal patterns, which is what I can do with Qwerty.

The Workman layout attempts to address all of the complaints that I had against the Colemak layout. Its design centers around a natural range of motion for the fingers. Is claims to be more efficient than Colemak or Dvorak. Given that it was designed specifically to address the things that I thought were wrong with the Colemak design I figured that I would give in a try.

Method. Whenever I go with a new keyboard layout I approach it through deep immersion; I switch cold turkey and usually spend intensive time training on a typing tutor to get the layout burned into my brain. I used keybr for my Workman training over the course of 4 months and a total of 1:42 time spent on the trainer. I also used it exclusively in my daily work.

I always make sure that I can be considered a fair typist in the layout I am using before passing judgment on said layout. This usually means that I hit the wall at some point after the 80 WPM mark. In this case it was right around the 100 WPM point. I would feel confident in saying that I reached a point of fluency.

In evaluating the layout I wanted to know 2 things: was it comfortable to type with, did it have the potential to meet or exceed my speed requirements? I compare mostly against the Colemak layout and Qwerty as these are the ones that I know the best at the moment.

Typing Comfort. Hands down this is a comfortable layout. The motions are natural and it was quite easy to pick up the layout right away. The emphasis on the natural range of motion combined with a focus on combinations makes a difference that you can definitely feel.

What makes this evaluation a little harder is comparing against something other than Colemak. On typing comfort alone the Workman layout wins handily against the Colemak layout in my opinion. Against Qwerty I also feel that it is pretty easy to make the case that the Workman is more comfortable. It is also true that common keystrokes that you might find on the UNIX CLI or in GUI applications are pretty easy compared to the Dvorak layout, but this entire thing has brought up an interesting discrepancy on normal text.

Comparing just by the numbers on normal text the amount of raw work between Workman, Colemak, Dvorak, and Qwerty, then it would seem that the day falls to Workman, but having used all of these layouts at speed, I begin to realize that such global metrics fail to adequately grasp the "potential parallelism" or the "effort at speed" factors.

Potential parallelism is the degree to which a layout enables the typist to overlap and distribute typing actions across the various muscles of the body. This is not the same as how evenly we can use these muscles over time, but instead is about how many muscles we can use at the same time to some good effect. Metrics like same-hand utilization that capture alternation patterns get at this concept to some degree. If you have a high degree of alternation, then you can overlap the actions of one hand with another while typing. Even on a single hand, some actions are easier to layer than others.

In the case of the Workman layout, there is an intentionally high single-hand utilization. This means that the norm is to have one hand idle while the other performs a letter combination. It does have good parallelism within a single hand, though, and by this I think that it maintains a better potential parallelism than Colemak even with the high single-hand utilization.

Effort at Speed is my attempt to capture the idea that the relative ease of an action at speed may not directly correspond to the total theoretical effort required to complete the action. That is, not all actions increase in difficulty at the same rate as their speed of execution increases.

Now, effort at speed and potential parallelism are undoubtedly related, both to each other and to my other typing requirement, speed. Some of these ramifications I will consider in the next section. As it relates to comfort, let me just say that the alternation and movements of the Qwerty and Dvorak layouts allow them to scale very well at speed, whereas Workman does not scale nearly as well, and Colemak the worst of all by a large margin. With Colemak I was never able to reach a good comfort level past 100 WPM. With Workman I found myself experiencing more fatigue at speed than might be expected from the numbers and the design. I blame a great deal of this on the choice to use high single-hand utilization.

Typing Speed. In the case of speed the situation is not nearly so positive as for comfort. The Workman layout is undoubtedly a comfortable layout, but like the Colemak layout, I have trouble pushing this layout past 100 WPM.

The good news, firstly, is that I find it much easier to drive this layout quickly than with Colemak by a large margin. I would pick this layout hands down over Colemak if I were trying to go fast. The emphasis on comfortable range of motion translates directly into gains over the Colemak layout.

Unfortunately, effort at speed and potential parallelism play a large role in the speed of a layout when you are typing fast. The high single hand utilization in the Workman layout means that one hand is too idle too much of the time. I am convinced at this point that good hand alternation is important to the ability to type very quickly. Workman has reasonably comfortable combinations in a single hand, but you just cannot type that same bunch of characters with one hand as fast as you can type them with both provided that there is a reasonable effort at speed to be found.

This does not mean that the Workman layout is a bad layout, but it does mean that you have to work harder to get that 120+ WPM mark.

Again, as with the analysis of the comfort of the layout, I think the issues with speed are the direct result of Workman's choice to favor a high single hand utilization. This seems to have been the Achilles's Heel of this layout, which otherwise has so much going for it.

Next Step. The bottom line, now that I have given these other layouts a good fighting chance, is that Dvorak is the only alternative layout in which I was able to relatively easily match the speed potential of the Qwerty layout in equal or less effort both in training and in actual effort during typing. However, that was some time ago, and the reasons that I gave up the Dvorak layout are no longer as relevant, because I no longer spend as much time on the command-line typing ls (I mostly use a file manager for that now). Will the layout still compete with the Qwerty layout favorably? It is time to find out.

To that end I will be switching over to the Classic Dvorak layout (indeed, I already have, and I am typing this article using the layout), comparing it to the Qwerty layout again. Previous experience already tells me that the layout will be more comfortable, but the question now becomes whether or not I will be able to match or exceed my Qwerty speeds. I simply could not have done so with the Workman or Colemak layouts, but I did do it once before with the Dvorak layout. That was when I was looking at 120 WPM as my highest score, though, and not as my average. I really want to see if I can push my performance to the next level and manage a consistent 130 WPM average with bursts out into the 160 WPM range. 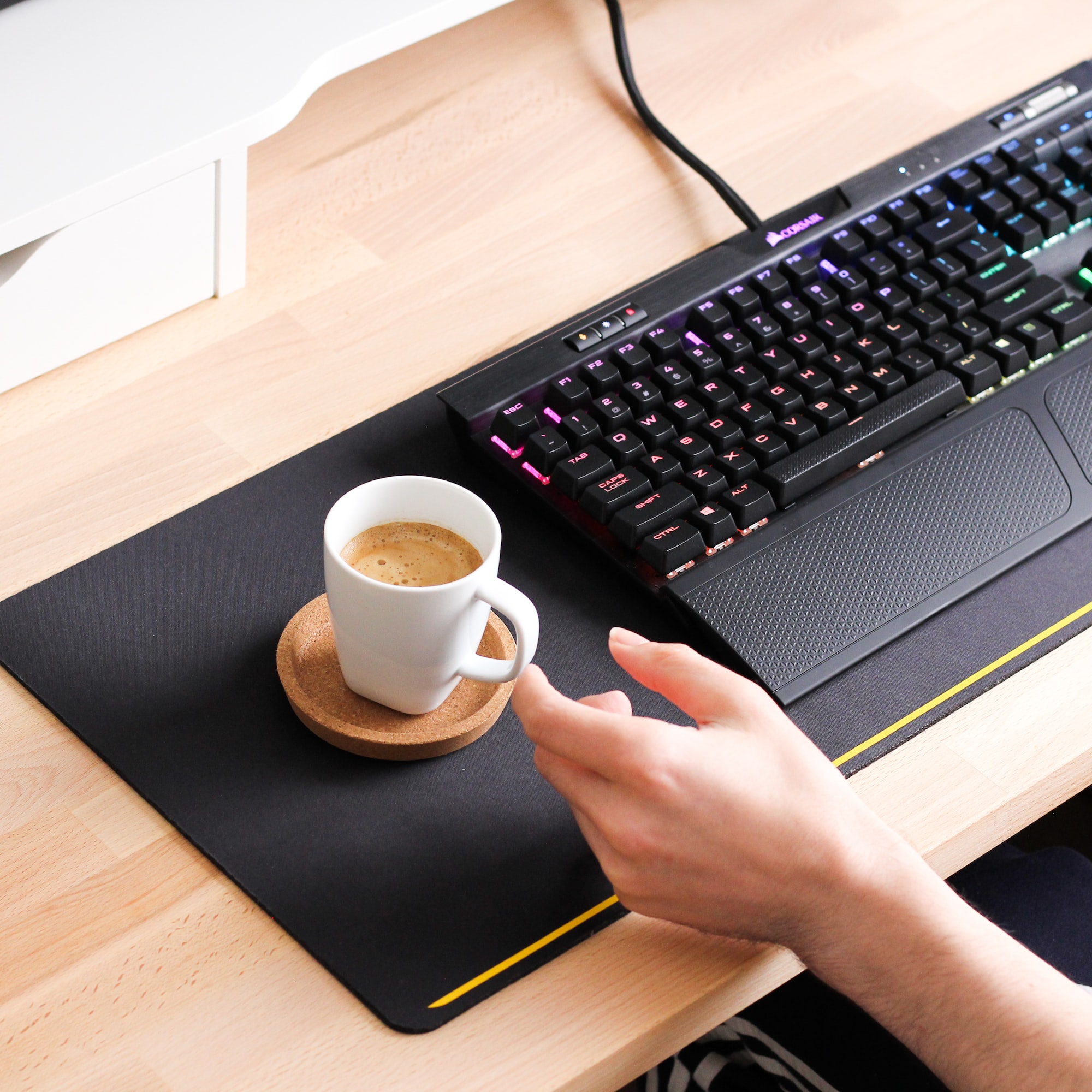 Some of you will recall that I recently had a new fastest keyboard in my life. Well, after some more
Nov 27, 2019
1 min read
Aug
02

It's Official: TEK 227 is my fastest keyboard!

In my last post I discussed how I was attempting to beat my previous record in typing speed that I
Aug 2, 2016
1 min read
Jul
19

A little while ago I posted my thoughts on the latest generation of Truly Ergonomic keyboards. Overall, I feel very
Jul 19, 2016
4 min read
Jul
11

It is official. After spending some time with my new keyboard I was finally able to duplicate my performance with
Jul 11, 2016
Jan
14

A reader kindly asked me to give an update on my keyboard experiences and particularly my experiences relating to my
Jan 14, 2016
4 min read